Two new features for labeling data have been added to Androidplot in 0.5.1:

First, the LineAndPointFormatter has been updated to support drawing text strings above the points themselves.  Using this functionality is as simple as passing in an instance of PointLabelFormatter to your addSeries calls: And here's what it looks like: 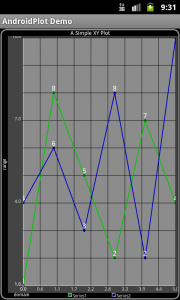 For those not wanting to use PointLabelFormatter you'll notice that the old 3 argument version of addSeries has been deprecated.  All you need to do is pass in null: For the time being you'll need to explicitly cast this null to PointLabelFormatter to resolve the ambiguity between the new 4 argument version of addSeries and an older, deprecated version. 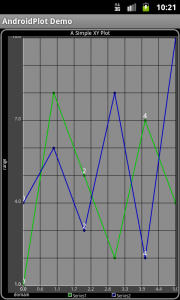